Grow your business online by awesomely designed mobile apps
that fits all types.

Mobile application development is the process of creating software applications that run on a mobile device, and a typical mobile application utilizes a network connection to work with remote computing resources. Hence, the mobile development process involves creating installable software bundles (code, binaries, assets, etc.) , implementing backend services such as data access with an API, and testing the application on target devices.

Although there are some similarities between these two platforms when building applications, developing for iOS vs. developing for Android involves using different software development kits (SDKs) and different development toolchain. While Apple uses iOS exclusively for its own devices, Google makes Android available to other companies provided they meet specific requirements such as including certain Google applications on the devices they ship. Developers can build apps for hundreds of millions of devices by targeting both of these platforms.

There are four major development approaches when building mobile applications

Each of these approaches for developing mobile applications has its own set of advantages and disadvantages. When choosing the right development approach for their projects, developers consider the desired user experience, the computing resources and native features required by the app, the development budget, time targets, and resources available to maintain the app.

Although there are some similarities between these two platforms when building applications, developing for iOS vs. developing for Android involves using different software development kits (SDKs) and different development toolchain. While Apple uses iOS exclusively for its own devices, Google makes Android available to other companies provided they meet specific requirements such as including certain Google applications on the devices they ship. Developers can build apps for hundreds of millions of devices by targeting both of these platforms.

There are four major development approaches when building mobile applications

Each of these approaches for developing mobile applications has its own set of advantages and disadvantages. When choosing the right development approach for their projects, developers consider the desired user experience, the computing resources and native features required by the app, the development budget, time targets, and resources available to maintain the app.

Native mobile applications are written in the programming language and frameworks provided by the platform owner and running directly on the operating system of the device such as iOS and Android.

Cross-platform native mobile applications can be written in variety of different programming languages and frameworks, but they are compiled into a native application running directly on the operating system of the device.

Hybrid mobile applications are built with standard web technologies – such as JavaScript, CSS, and HTML5 – and they are bundled as app installation packages. Contrary to the native apps, hybrid apps work on a ‘web container’ which provides a browser runtime and a bridge for native device APIs via Apache Cordova.

PWAs offer an alternative approach to traditional mobile app development by skipping app store delivery and app installations. PWAs are web applications that utilize a set of browser capabilities – such as working offline, running a background process, and adding a link to the device home screen –  to provide an ‘app like’ user experience. 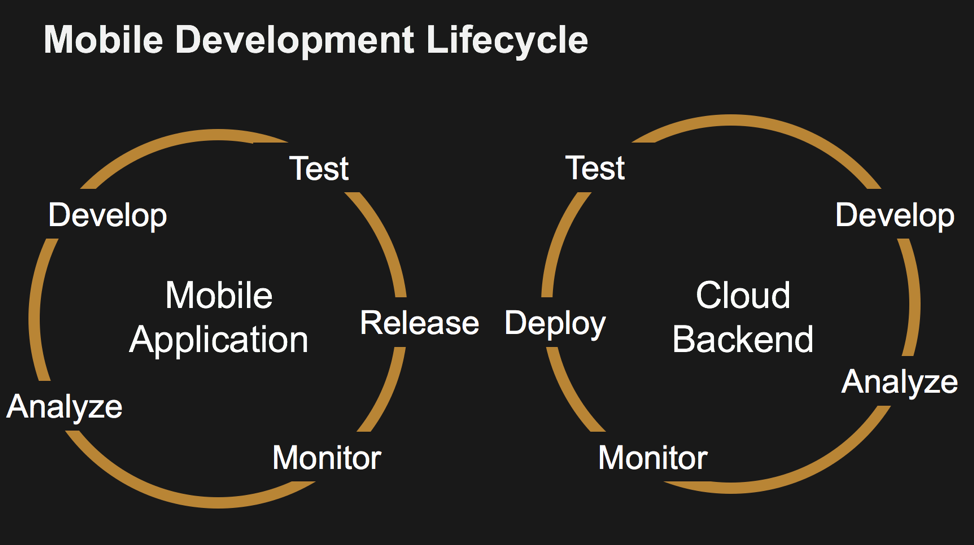 In the early days of the modern smartphone applications era, mobile applications went through a similar evolution as first websites. At first, the applications and sites where wholly contained within themselves and acted as little more than static advertisements for the brand, company, product, or service.

However, as connectivity and network capabilities improved, the applications became increasingly connected to sources of data and information that lived outside of the app itself, and the apps became increasingly dynamic as they were able to update their UI and content with data received over the network from queries to data sources.

As a result, the mobile front-end applications increasingly rely on and integrated with back-end services which provide data to be consumed through the mobile front-end. Such data can include, for example, product information for e-commerce apps or flight info for travel and reservation apps. For a mobile game, the data may include new levels or challenges and scores or avatars from other players.

How Front-end ‘Talks’ to the Back-end?

The mobile front-end obtains the data from the back-end via a variety of service calls such as APIs. In some cases, these APIs may be owned and operated by the same entity developing the mobile application. In other cases, the API may be controlled by a third party and access is granted to the mobile application via a commercial arrangement.

For example, a developer may obtain social media or advertising content by making calls to media or advertising company services. In this case, a developer may have to sign a contract in order to obtain credentials and a key that grants access to the API and governs how that developer can use it, how much it will cost, or how frequently it may be called, or how much data can be requested over what time period.

Why Developers Use a Cloud-backend?

For most of the applications, mobile developers are responsible for creating and managing the back-end services for their application. The mobile developer may not be an expert or even particularly skilled in spinning up and running a back-end infrastructure.

In such a case, developers may prefer to take advantage of a cloud services provider — a backend-as-a-service provider — that handles all of the drudge work and heavy lifting of managing back-end capabilities, so the developers can focus purely on the features and functionality they are building in their app, without having to worry about scalability, security, and reliability.

Depending on the size of the team producing the app, there may be many different people involved in the design and development of the front-end mobile app. The team size can range from a single developer who does everything associated with building the app, to tens, hundreds, and more people with specialized skills.

For example, there may be dedicated creative/graphics designers who are responsible for creating visual elements of applications like icons, backgrounds, colors, themes and other parts of the app. The team may also have user experience and user interface designs who work on the layout of the components, how they interact with each other and the user. In the case of certain types of games, a team may include motion graphics developers and even engineers who develop engines that govern the physics of how components move in the app, like a car in a racing game.

How Mobile Aps Integrate with the Backend?

Regardless of the size of the team, a critical element of the development effort is building the app logic that is responsible for making network calls to the back-end services, retrieve data and update the data in the back-end systems with new information generated from the app.

These back-end services are typically accessed through a variety of application programming interfaces, most commonly known as APIs. There are different types of APIs, such as REST and GraphQL, and there are also a wide variety of means and styles of accessing them. While some back-end service APIs are available directly to the application through calls in the platform itself, many of the specialized services have to be integrated into the app via a software development kit, commonly known as an SDK. Once the SDK has been added to the app via the development environment, then the application can make use of the APIs defined in the SDK.

How to Interact with the Backend Data?

An example of a back-end service for a mobile front-end could be a database that contains information used in the app. To access the database directly, the mobile developer would have to know the network location of the database, the protocol for accessing the database, the credentials for authenticating and authorizing the data access, and the specific database commands needed to extract the needed data.

Alternatively, the developer can utilize a specialized API when interacting with the database; the developer may only have to know the parameters needed in a method call to get or updated the needed information. In some cases, the mobile developer may develop these APIs themselves or use the API definition provided to them by the owner/operator of the back-end resource.

Typically, a REST API is used to interact with data sources on the cloud, such as a cloud database. A GraphQL API is also another option for developers, as it makes easy to work with backend data in a mobile application. GraphQL provides querying support through a single API endpoint, and a data schema that can be used to build and easily extend data models that are used in the app.

Regardless of what front-end platform or development methodology is being used, delivering high-quality mobile applications that delight and retain users requires reliable back-end services.

The answer is increasingly clear; to improve developer productivity and efficiency, mobile app programmers should only build their own services if they are highly specific to the domain of the application and embody unique intellectual property. Also, even for the services they build themselves, they should almost always leverage cloud-based services to build and maintain their backend infrastructure.

Give us a call